(QNO) - Hoi An received a Mongolian delegation - the first New Year’s callers on the morning of January 1st, 2023.

The delegation included 34 people; most of them were Mongolians and some were Koreans. They visited Hoi An communal house, Duc An ancient house, Quang Dong club-house, Japanese Covered Bridge, and Song Hoai Square.

At the ceremony, there were “sac bua” (Lunar New Year greeting) singing and Tengu dancing.

The first New Year’s callers were given flowers and souvenirs; then they enjoyed the space for Vietnam’s Tea and visited some attractions.

It is the first time the delegation of the first New Year’s callers to go to Hoi An. They were happy when receiving the warm welcome from the local government and people. 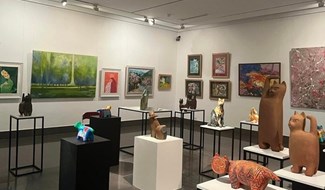 Hanoi (VNA) - An exhibition featuring paintings and installations on the image of the cat, the zodiac animal for the upcoming Lunar New Year, is taking place at the Vietnam Fine Arts Museum in Hanoi.