Earlier, Hoi An city won the title of Asia’s Leading Cultural City Destination in the years of 2019 and 2021.

The World Travel Awards was launched in 1993 to acknowledge excellence in the travel and tourism industry. Heralded as the “travel industry’s equivalent of the Oscars” by the Wall Street Journal, the awards are based on votes from the public and travel professionals across the globe. 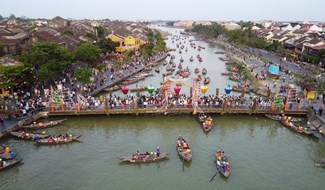 Tourists flock to Hoi An city