VOV.VN - Despite Vietnam facing challenges in restarting its economy following a prolonged lockdown, positive dynamics observed in October would suggest continued pickup and strengthening of growth in coming months, according to the World Bank.

The assessment was released in the November edition of the World Bank (WB)’s monthly Vietnam Macro Monitoring.

The report outlines that industrial production and retail sales have been rebounding as economic activities progressively resume, although they have yet to recover to the levels observed before the local outbreak which hit the country in April.

This rebound was largely driven by the resumption of production activities in Ho Chi Minh City along with its surrounding industrial hubs.

In total, the nation attracted US$23.7 billion worth of committed FDI in the opening 10 months of the year,  a figure 1.1% higher than the same period from last year. Despite rising fuel prices, inflation remained subdued as a result of softening food prices and weakening domestic demand for non-food products.

The October budget balance returned to surplus in October, mainly driven by a sharp fall in expenditures, although revenues continued to decrease for the third consecutive month. The year-to-date budget also recorded a surplus, thereby signaling a continued contractionary fiscal policy that is not supporting aggregate demand during its recovery.

Experts of the WB have therefore recommended that the Vietnamese Government conduct fiscal policy interventions through tax relief, acceleration of investment project implementation, and social assistance of the needy.

As part of this, the approved VAT reduction for businesses in travelling, hospitality, and entertainment ahead in November and December are expected to help boost weak domestic demand in this subsector.

With the local economy reopening and the number of new cases increasing, the continued rapid pace of vaccination and vigilance in testing and quarantining should therefore help to avoid a new wave of infections forcing new restrictive measures to protect lives, experts noted.

Economists have also advised the country to control inflation carefully, particularly as strengthening domestic demand amid rising energy prices around the world may create upward pressure on prices.

They also emphasised the necessity of accelerating the  disbursement of capital investments, which can support aggregate demand, noting that increased social assistance will be able to support private demand.

Moreover, the authorities should continue paying close attention to the health of the financial sector moving forward. 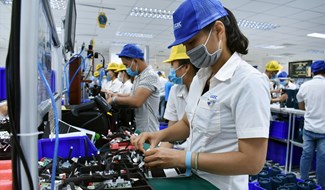 (QNO) - Foreign direct investment (FDI) from the European Union (EU) to Vietnam in the medium and long term is forecast to increase significantly with high-quality projects.