According to details in the report, industrial production and retail sales posted another month of high growth rates of 15.6% on-year and 50.2% on-year, with this mostly driven by the low-base effects related to the COVID-19 lockdowns in August, 2021.

Month-on-month growth was recorded in terms of retail sales moderated in July and August after a strong Q2 recovery in 2022. Exports and imports grew by 22.6% on-year and 13.3% on-year in August, respectively, higher than in July.

FDI commitments reflect caution among investors in the face of global uncertainty, while FDI disbursement continued to improve, thereby contributing to a positive trend over an 11-month period. CPI inflation changed from 3.1% on-year in July to 2.9% in August thanks to softening fuel prices, while core inflation continued to accelerate from 2.6% in July to 3.1% in August due to the second-round effects of previous increases in commodity prices impacting productions costs and final prices. Credit growth remained strong at 16.2% on-year, while overnight interbank interest rates for the end of period increased from 0.71% in June to 4.19% in July and 4.42% in August.

This can partly be put down to mismatches of lower domestic deposits caused by low deposit rates and high demand for domestic credits, with banks competing in the interbank market for funds. It can also be partly due to SBV sales of some reserves over the past few months aimed at stabilising the Vietnam Dong against a strengthening US Dollar, thus tightening domestic liquidity.

The budget registered an eighth month surplus, with the Government not borrowing much in the domestic market and Government-guaranteed bond issuance equaling to only 27.4% of the plan in the first eight months of the year, less than a half of the borrowing seen a year ago.

Think tanks analysed that incentivising alternative energy production and use would reduce the economy’s dependence on imported fuels and promote greener growth.

Furthermore, strengthening the social support system, including its registration, targeting, and disbursement systems, would facilitate reaching affected citizens during such shocks. 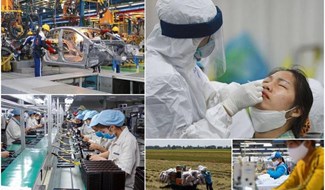 Bright outlook ahead for Vietnamese economy in 2022

VOV.VN - Despite numerous enduring difficulties caused by the prolonged COVID-19 outbreak, Vietnam has managed to secure a GDP growth rate of 2.58% this year, beating off recent projections by the World Bank and the Asian Development Bank.