VOV.VN - Prime Minister Pham Minh Chinh and his Japanese counterpart Kishida Fumio have noted with pleasure the development of bilateral ties and agreed on major orientations and measures to open up a new development period for the Vietnam-Japan extensive strategic partnership.

During their talks in Tokyo on November 24, PM Chinh congratulated Kishida on his re-election as the PM of Japan, and thanked the latter for his special sentiments and significant contributions to the development of the relations between the two countries.

He conveyed the invitations of Party General Secretary Nguyen Phu Trong and other Vietnamese leaders to the Emperor and Empress, PM Kishida and leaders of Japan to soon visit Vietnam.

PM Kishida hailed the strong development of the bilateral ties over the past years, which, he said, are now at the most flourishing period in history.

Japan places great importance on its relations with Vietnam, he said, while praising socio-economic achievements the Southeast Asian nation has recorded as well as its increasingly important role and position in the region and the world.

The Vietnamese cabinet leader affirmed that the Vietnamese Government will continue to create an open, transparent investment climate, actively support businesses and fulfill its commitments towards investors.

PM Kishida pledged that his nation will provide comprehensive support for Vietnam in the COVID-19 fight, saying the Japanese Government will provide an additional 1.5 million COVID-19 vaccine doses for Vietnam.

In response, PM Chinh expressed his gratitude and appreciation to the Japanese Government and people for their donation of 5.6 million doses of COVID-19 vaccines in total as well as many medical equipment and supplies.

The two sides concurred to continue working together closely on research and production of COVID-19 vaccines and treatment drugs.

The pair agreed on the need to continue promoting security and defence cooperation, joining the United Nations peacekeeping force, overcoming war consequences in Vietnam, and bolstering collaboration to improve law enforcement at sea.

They agreed to consider reopening commercial air routes and deploying the vaccine passport scheme, stepping up cooperation in socio-economic development in the face of negative impacts of the COVID-19 pandemic and cooperation programmes using Japan's official development assistance during the post-pandemic recovery period.

The two PMs also pledged to work hand in hand to increase and expand the reception of Vietnamese guest workers to Japan, and augument  cooperation in dealing with issues related to Vietnamese apprentices and students.

Regarding the East Sea, the two PMs underlined the importance of ensuring security and safety of navigation and aviation and settling all disputes and differences via peaceful measures, including the full respect for the diplomatic and legal processes, and not using force or threatening to use force, based on international law, especially the 1982 United Nations Convention on the Law of the Sea (UNCLOS).

They also emphasized the necessity to fully and effectively implement the Declaration on the Conduct of Parties in the East Sea (DOC) and soon finalise an effective, practical and legally-binding Code of Conduct in the East Sea (COC).

After the talks, the two PMs witnessed the signing and exchange of 11 documents by ministries, agencies, and enterprises of the two countries.

The two sides also issued a Joint Statement Toward the Opening of a New Era in Japan-Vietnam Extensive Strategic Partnership for Peace and Prosperity in Asia. 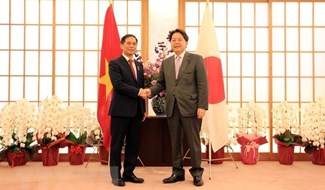 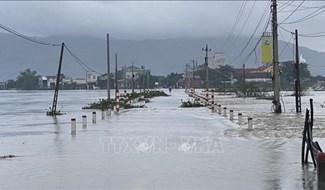 Brussels (VNA) – Vietnam can learn from and apply experience drawn from measures that have been taken by Brussels to respond to climate change, prevent floods and protect the environment, Tristan Roberti, President of the Environmental Commission at the Brussels-Capital Region, said.