New York (VNA) - Vietnam will work with countries and people around the world to prevail over the COVID-19 pandemic, and build a world of peace, prosperity and happiness for all, President Nguyen Xuan Phuc said at the general debate of the 76th session of the United Nations General Assembly (UNGA) in New York, the US, on September 22 (local time).

In his speech, President Phuc put forth specific proposals to promote multilateral cooperation with the UN as the center and taking international law as the foundation to jointly cope with complex global challenges such as wars, conflicts, resource disputes, climate change, and the COVID-19 pandemic, which are negatively impacting peace, security and development in the world.

The President said the most urgent issue right now is to control the COVID-19 pandemic through international cooperation. He noted that priority allocation of vaccines should be given to nations with a low vaccination rate, while developing countries should be enabled to engage in vaccine production and supply chains.

The key solution to contain the pandemic and foster economic recovery lies in each nation’s ability to strengthen its resilience, President Phuc said.

“Resilience can only be sustained if it is based upon cooperation and connectivity among nations, particularly at a time when non-traditional security challenges do not know borders and can impact any nation,” he said.

The leader informed that Vietnam is working closely with fellow ASEAN members to promote ASEAN centrality in the maintenance of peace, security and prosperity in Southeast Asia and the Asia-Pacific at large.

Vietnam shares ASEAN’s position and the international community’s common voice on the importance of peace, stability, maritime security and safety, freedom of navigation and overflight in the East Sea, he affirmed.

He called on parties involved to refrain from unilateral actions that may further complicate the situation, resolve disputes and differences through peaceful means in line with the UN Charter and international law, particularly the 1982 United Nations Convention on the Law of the Sea (UNCLOS).

It is also necessary to fully observe the Declaration of Conduct (DOC) by parties in the East Sea, and soon achieve a substantial and effective Code of Conduct (COC) in line with international law, including UNCLOS 1982, the President said.

President Phuc also highlighted Vietnam’s aspiration for a strong and prosperous country, a law-governed state of the people, for the people and by the people, and an ability to invoke the patriotism, perseverance, great national solidarity and innovation of the entire nation.

“The path ahead will not be easy. But I am convinced that the world people’s hearts will beat as one. Vietnam will work with countries and people around the world so that together we can prevail over the pandemic, and build a world of peace, prosperity and happiness for all. And this will be a glorious victory for us all,” he concluded.

Right after delivering his speech, the President got applauses from international friends. Many said Phuc's speech has conveyed a strong message on a dynamic, innovative, thriving and peace-loving nation of Vietnam, that makes practical, responsible and effective contributions to common work of the UN./. 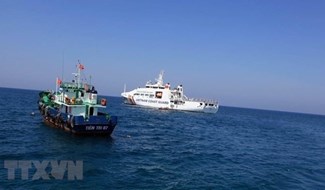 Hanoi (VNA) - Vietnamese relevant agencies always keep a close watch on developments in the East Sea, and Vietnam has full historical evidence and legal foundations to affirm its sovereignty over Hoang Sa (Paracel) and Truong Sa (Spratly) archipelagos in accordance with international law, spokesperson of the Ministry of Foreign Affairs Le Thi Thu Hang has affirmed. 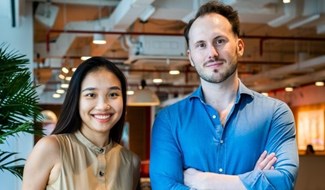 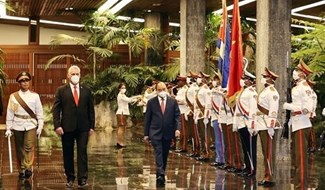 Hanoi (VNA) – Cuban Ambassador to Vietnam Orlando Nicolás Hernández Guillén has appreciated President Nguyen Xuan Phuc’s official visit to Cuba from September 18-21, affirming that the outcomes of the visit will contribute to deepening the time-tested friendship and solidarity between the two countries.