Germany’s Stuttgarter Nachrichten newspaper has recently posted an article saying that Vietnam is one of the most beautiful countries in Asia, and highlighting five reasons for Germans to travel to the Southeast Asian nation.

According to the article, travelling to distant countries has not been easy for globetrotters in the past two years. However, from mid-March, vaccinated and recovered people will be allowed to enter the popular Southeast Asian holiday destination without quarantine.

It wrote that one of the five reasons why Vietnam is worth visiting is incredibly delicious food. Vietnamese cuisine is one of the tastiest in the world, it wrote, adding that fish and meat are among the main ingredients. But vegetarians need not fear as many restaurants offer meat-free options.

The second is that Vietnam is a country with plenty of sun and beautiful beaches thanks to the long coastline. The author chose Ha Long Bay, a UNESCO-recognised World Heritage Site, and Phu Quoc island as attractive destinations that are worth visiting.

The Mekong Delta is also a reason for Germans to visit Vietnam. According to the article, in order to really experience the tranquility of life in the Mekong Delta, holiday-makers should plan at least three days. The fertile soil allows farmers here to harvest rice three times a year. That's why there are an incredible number of rice fields to admire. A special highlight is Cai Rang floating market where hundreds of wooden boats filled with mangoes, sugar cane and other foods float on the water and people trade their goods.

Other interesting things in Vietnam are narrow streets, old temples and magnificent buildings. A pearl in the heart of Vietnam is the city of Hoi An, as the historic old town is the only one that was not completely destroyed during the war and that is why it was also named a UNESCO World Heritage Site. The capital city of Hanoi is also worth a detour, the article wrote, adding that here travellers can see the typical life of the Vietnamese.

The fifth reason, according to the German newspaper, is Vietnam’s beautiful landscape with green rice terraces and sand dunes. They are advised to visit Phong Nha-Ke Bang National Park and Nui Chua National Park if they really want to immerse themselves in nature.

(QNO) - The National Tourism Year- Quang Nam 2022 is an excellent chance for Quang Nam to introduce a new tourism brand, green tourist destination to the public. 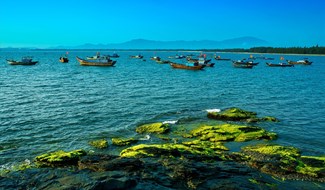 (QNO) - Quang Nam is making every effort to renew local tourism products, to upgrade tourist and transportation facilities to attract visitors after