Hanoi (VNA) – National Assembly Chairman Vuong Dinh Hue has welcomed COP26 President Alok Kumar Sharma, who is also British Minister for the Cabinet Office, for visiting again to discuss cooperation in climate change responses and pushing for the establishment of a Just Energy Transition Partnership between Vietnam and its development partners.

Thanking Hue for his reception in Hanoi on August 29, Sharma said this is his third visit to Vietnam in 18 months and that he talked with Minister of Environment and Natural Resources Tran Hong Ha about various topics, particularly a national strategy against climate change, reduction in greenhouse gas emissions, Vietnam’s Power Development Plan VIII (PDP VIII), and the country’s commitment to achieving net zero emissions by 2050.

Hue said Vietnam is among leading countries in realising the UN Millennium Development Goals and also one of the most vulnerable to climate change.

Even though Vietnam is confronting various challenges in terms of finance, technology and capacity like many other developing countries, it is determined to fulfil its commitments made at the 26th UN Climate Change Conference (COP26) in Glasgow, the UK last year, he said, particularly referring to the “2050 net-zero emissions goal.”

As it is a political commitment, he emphasised, it not only reflects Vietnam’s policy towards energy transition, green growth and climate change adaptation, but also demonstrates its responsibility in joint global initiatives.

Informing his guest of Vietnam’s steps towards realising the goal, the NA leader said the country has released a set of tasks and solutions for fulfilling the COP26 commitments, the national strategy against climate change by 2050, an action plan on cutting methane emissions by 2030, and an action programme on green energy transition and reduction of carbon and methane emissions in the transport industry.

Vietnam is finalising the PDP VIII, aiming to make the most of natural gas and renewables for electricity production and minimise the number of coal-fired thermal power plants, he added.

He thanked COP26 President Sharma for helping Vietnam mobilise support from the UK Government, the EU and development partners in its energy transition process through driving forward discussions on the Just Energy Transition Partnership.

Vietnam wishes to learn from developed countries’ practices in order to seize opportunities and surmount challenges in energy transition, he added.

Given that talks on energy transition remained very complex and difficult, he said Sharma’s visit is very important as it is expected to drive the process forward.

Hue further noted that the Vietnamese NA has developed an action plan to enhance the regulatory framework for the energy transition and will allocate resources for this process and intensify supervision on the legal enforcement of this matter.

Agreeing with Hue's view, Sharma highly valued Vietnam for its strong commitments at COP26, saying energy security is a shared concern among many countries, including those from Europe, as these nations are accelerating use of renewables to satisfy rising demand and ensure energy security.

He urged Vietnam to revise its legal framework to facilitate the participation of private investors in energy transition. He also hoped that the establishment of a Just Energy Transition Partnership will play a crucial role in Vietnam’s realisation of its COP26 commitments./. 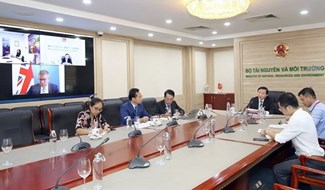 Hanoi (VNA) – Minister of Natural Resources and Environment Tran Hong Ha on July 11 had an online meeting with Alok Kumar Sharma, Minister for the Cabinet Office of the United Kingdom (UK) and President for the 26th United Nations Climate Change Conference (COP26), discussing cooperation in response to climate change. 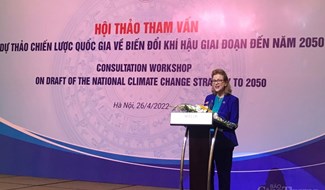 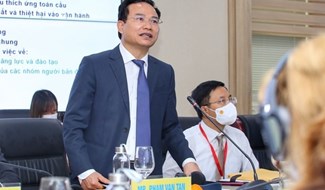 Hanoi (VNA) – Vietnam's commitment and responsible contributions at the 26th United Nations Climate Change Conference of the Parties (COP26) were highly appreciated by the international community, opening up many opportunities for cooperation in low-emission growth and promoting circular economy in adaptation to climate change, said a Vietnamese official. 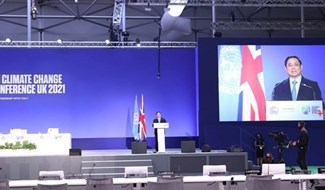 London (VNA) - Vietnam’s strong commitments at the 26th United Nations Climate Change Conference of the Parties (COP26), held in Glasgow, Scotland (the UK), have been well received by the international community.