The prize, worth US$200,000, recognises individuals for sustained and significant efforts to protect and enhance the natural environment, often at great personal risk.

Thai was given the award at a virtual ceremony, which took place on June 15, for his contributions to rescuing 1,540 pangolins from the illegal wildlife trade between 2014 and 2020 and establishing Vietnam’s first anti-poaching team under the co-management of Save Vietnam's Wildlife – a local non-governmental organisation and the Government since 2018.

The team has destroyed 9,701 animal traps, dismantled 775 illegal camps, confiscated 78 guns and arrested 558 poachers between June 2018 and December 2020, leading to a significant decline in illegal poaching in Pu Mat National Park in the central province of Nghe An.

In 2016, Thai opened the Carnivore and Pangolin Education Centre, the first of its kind in Vietnam, in order to provide wildlife conservation courses to local children and the general public. He also gives training courses to customs officials, border guards and forest rangers on wildlife laws and how to properly care for seized pangolins.

The Goldman Environmental Prize was established in 1989 by late San Francisco civic leaders and philanthropists Richard and Rhoda Goldman.

In 32 years, the prize has had an immeasurable impact on the planet. To date, the prize has honoured 206 winners from 92 nations, and has shone a light on many of the critical issues facing the Earth. 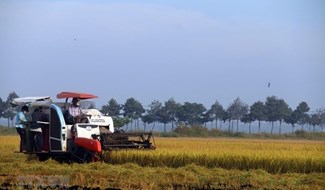 Hanoi (VNA) – The first National Food Systems Summit Dialogue was held by the Ministry of Agriculture and Rural Development (MARD), in partnership with a number of ministries, the UN in Vietnam and international development partners in Hanoi on June 15 morning.