Hanoi (VNA) -  The 22nd Assembly of the World Peace Council (WPC) has been a success, creating a new milestone in the WPC’s over-70-year development history, President of the Vietnam Union of Friendship Organisations (VUFO) Ambassador Nguyen Phuong Nga told the press on November 25.

Nga said it is the first time the Assembly has been held in Vietnam with the attendance of nearly 100 delegates from 50 countries, including those representing the world’s progressive and peace-loving forces and from organisations that have friendship and cooperation with the WPC.

Delegates agreed to adopt a Political Declaration which shows a message of determination to strengthen solidarity and gather the world’s peace-loving and progressive forces together to continue fighting for peace, justice, democracy, social justice and sustainable development. This message holds significance in the current context, especially at a time when the world is facing risks of wars, non-traditional security challenges and environmental degradation.

It also conveys peace-loving and progressive forces’ strong determination to join hands for sustainable development, step up efforts to protect the planet and build a good future for later generations, she said.

According to Nga, another success was that speeches at the event once again affirmed great support for the just struggle of the Vietnamese people for independence, freedom and socialism. International friends expressed their admiration for President Ho Chi Minh, Vietnamese leaders and people for their great achievements in national development.

President Nguyen Xuan Phuc and President of the Vietnam Fatherland Front Central Committee Do Van Chien spent time meeting and talking with delegates, while Permanent Vice Chairman of the National Assembly Tran Thanh Man attended and delivered a speech at the opening ceremony.

Delegates spoke highly of Vietnam’s thorough preparations, from agenda to reception and coordination with the WPC Secretariat and WPC leaders, leaving a good impression of the capital city and Vietnam. This was also a good opportunity to promote Vietnam to the world and international friends, she said.

The ambassador also said that the Assembly and the WPC had affirmed their stance on supporting Vietnamese Agent Orange/dioxin victims and working closely with them in the fight for justice.

It was a very precious occasion to express the gratitude of generations of Vietnamese people for the great contributions and valuable support of the WPC and international friends, including many delegates present at the event.

"Vietnam today is a peaceful, independent, free, prosperous and happy country. It is the best way to thank friends worldwide," she said.

Asked about Vietnam’s future contributions to the world peace movement, Nga said as one of the founding members of the WPC and member of the WPC Executive Committee for many tenures, Vietnam will continue playing an active and proactive role and make responsible contributions to the WPC’s common work. Initially, the country will enhance consensus, solidarity and unanimity among members as well as cooperation between the WPC and peace and progressive organisations globally for the common goal of peace, sustainable development and the fight against oppression and injustice.

Vietnam will also come up with its own action programme. The VUFO and the Vietnam Peace Committee will continue with activities in response to appeals of the WPC and contribute initiatives to common efforts; continue promoting peace, settling disputes by peaceful means and joining efforts to fuel sustainable development, including protection of natural resources, climate change response, and improving the quality of education-training and human resources, thus equipping citizens with knowledge about laws and peace to make each of them an ambassador of peace./. 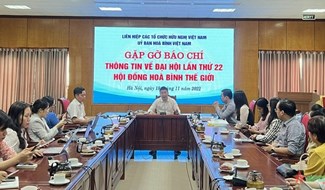 VOV.VN - The 22nd Assembly of the World Peace Council (WPC) officially opened on November 21 in Hanoi.