Hanoi (VNA) – The United Nations Development Programme (UNDP), in collaboration with the Department of Climate Change under the Ministry of Natural Resources and Environment (MONRE), launched a special report entitled “Youth for Climate Action in Vietnam 2022” on November 1.

This year's report was co-written by 24 young authors from all over the country. It contained four key themes including youth in climate policy and decision-making processes, accelerating the transition towards a circular economy, climate mitigation towards net zero, and climate change adaptation and disaster risk reduction.

The authors documented and tracked more than 130 youth-led climate initiatives and projects that were outstanding good practices of meaningful climate action. They also identified several priority accelerators moving forward, including the establishment of a youth climate policy working group, education and capacity-building programmes on climate change, and financial and technical support for youth-led projects.

According to the special report, youth face two key obstacles: financial limitations and lack of technical knowledge and skills. It also recommends accelerators, such as developing a climate financing hub for youth, promoting the role of youth in climate governance and diplomacy, and creating a set of specialised publications for youth.

At the event, the youth also presented their youth statement in which they called on the Government to prioritise investment in renewable power plants; establish the roadmap to phase out fossil fuel by 2030; restrict financial institutions from investing in high emission projects; and minimise the use of single-use plastic products with an aim to eliminate these products completely by 2030.

They suggested local governments and stakeholders to engage youth in organising communication and awareness raising campaigns on climate change, promotions of  green lifestyles and climate resilient action. Priority should be given to the establishment a working group on youth and climate policy to represent youth voices at national and international policy forums, they added.

In her remarks at the event, Ramla Al Khalidi, United Nations Development Programme (UNDP) Resident Representative in Vietnam, said that UNDP calls on all development partners to join hands to facilitate and advance an environment in which youth can rise to fully occupy their roles as agents of change.

“We pledge to support the Vietnamese youth, to ensure their concerns and ideas are heard, and to continue working with the youth to leverage their creativity to boost climate action,” she said.

“It is not only our interest but also our obligation to ensure that the youth and future generations will be able to live in a just, green, and resilient future.”

According to Tang The Cuong, Director General of the Department of Climate Change, the launch of the special report, which takes place before the 27th United Nations Climate Change Conference (COP27), is of great importance, contributing to the voice of Vietnamese youth in response to global climate.

“We hope agencies and organisations create more conditions for the Vietnamese youth to participate and contribute to the nation's efforts to respond to climate change in order to accelerate the achievement of the net zero emissions target by 2050,” he said./. 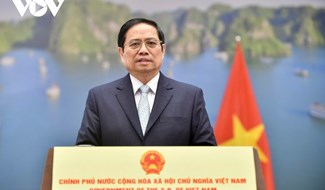 VOV.VN - Prime Minister Pham Minh Chinh has emphasised that the response to climate change requires a global approach, with stronger international solidarity, greater multilateralism, and the UN playing a central role in the process. 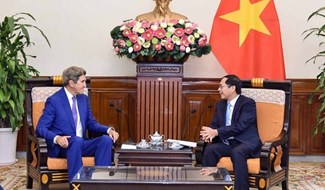 (QNO) - Hanoi (VNA) – Vietnam strongly commits contributions to global efforts in climate change response, and considers it as a strategic cooperation area between Vietnam and the US, Minister of Foreign Affairs Bui Thanh Son told US Special Presidential Envoy for Climate John Kerry in Hanoi on September 5. 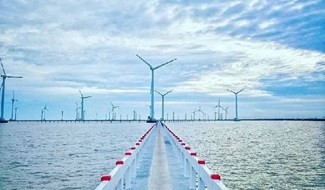