(QNO) - In Quang Nam forests, there is a herd of around 13-14 Asian wild elephants. They are distributed into 3 populations in Bac Tra My and Northwest Phuoc Son (about 5-6 individuals), and Nong Son (8 individuals).

These elephants are rare animals that need to be protected. So, an elephant reserve was established by the Quang Nam provincial People’s Committee in 2017, covering an area of nearly 19,000 hectares in Phuoc Ninh and Que Lam communes of Nong Son district.

Currently, the forest protection in the reserve is especially focused in order to maintain a safe habitat for the elephants.

According to the Management Board of the Elephant Reserve (MBER), the patrolling and protecting of forests have been strengthened, especially around the areas where the elephants are living or frequently appearing.

At the same time, MBER has also been attempting to raise the locals’ awareness so that they can help protect the elephants.

Besides, MBER has supported to develop people’s livelihood in the core and buffer zones of the elephant reserve.

Since 2018, the support programmes of seedlings, lighting, and construction materials have been implemented in 22 villages of 11 communes in the buffer zone of the elephant reserve.

In addition, 500-hectare forest regeneration has been assigned to 19 households in Que Lam commune.

As the elephants are living near residential areas, the local residents are guided what to do when they face the elephants in order to protect their crops without harming the elephants.

Besides, a 2.4-km fence of Fructus Gleditschiae has been made to prevent the elephants from going into the residential areas nearby.

Reportedly, most of the elephants in the reserve are now mature and grown well. 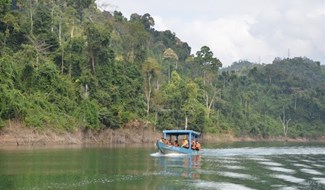