(QNO) - With the aim of sustainable development and joining the UNESCO’s Creative Cities Network (UCCN), Hoi An city (Quang Nam province) is making efforts to preserve and promote the values of its traditional craft villages and folk art.

According to Mr. Nguyen Van Quy - Deputy Director of the Hoi An Center for Cultural Heritage Management and Preservation, Hoi An has recently paid attention to the conservation and promotion of traditional crafts or craft villages.

Until now, there have been four crafts in the city recognised as national intangible cultural heritages, including the bird nest harvesting profession in Thanh Chau, carpentry in Kim Bong, pottery in Thanh Ha and vegetable farming in Tra Que.

The Center for Culture, Sports and Radio & Television of Hoi An has provided folk singing classes for schools and for children in the old quarter, organising Bai Choi performance contests, introducing Bai Choi to domestic and international events...

In particular, the game of Bai Choi taking place every night in Hoi An ancient town has become a unique tourism product that attracts a large number of visitors.

Traditional craft villages and folk art are the key Hoi An city (Quang Nam province) uses on the journey to approach the goal of the UNESO’s Ceative Cities Network.

The city will develop a long-term project to promote local cultural industry, including traditional crafts and folk art, creating development resources for Hoi An culture and helping Hoi An become a local and international creative destination. 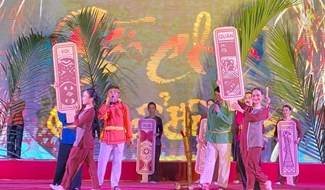 (QNO) - The “Vietnam cultural heritage space 2022” exhibition was opened in An Hoi Sculpture Garden in Hoi An city, Quang Nam province on July 8. Space for Vietnamese cultural heritages in Hoi An

(QNO) - An exhibition of Vietnamese cultural heritages will be held on July 8-13, 2022 in Hoi An city, Quang Nam province. The event is of the Vietnam’s National Tourism Year – Quang Nam 2022.