Kazimierz Kwiatkowsky (nicknamed Kazik) is considered a great friend of Hoi An, who contributed to bringing the values of Hoi An to the world

Present at the event were Wojciech Gerwel - Ambassador Extraordinary and Plenipotentiary of the Republic of Poland in Vietnam, Deputy Chairman of the Provincial People's Committee Tran Van Tan and those who used to live and work with the late architect Kazik.

Kazik with Hoi An

The late architect Kazik was born in 1944. He was a Polish conservationist closely associated with the preservation of cultural heritages in Vietnam and Quang Nam, Hoi An ancient town included.

He had been a volunteer working in My Son Sanctuary in Duy Son commune (Duy Xuyen district, Quang Nam province) since the early 1980s.

During nearly 16 years living and working in Quang Nam, Kazik spent all his free time helping to prepare everything for the recognition of the Hoi An ancient town as a national historical and cultural heritage on March 19, 1985 and then a UNESCO intangible cultural heritage of humanity.

Kazik also suggested that Hoi An plan for the local development via tourism.

Talking about Kazik, Chairman of the Hoi An city People’s Committee Nguyen Van Son stated that Kazik was a special friend of Hoi An. He was wholeheartedly for science and heritage conservation.

According to Prof. Dr. Hoang Dao Kinh, Kazik was a wonderful person. He was a rare foreigner passionately loving and protecting the cultural heritage of another nation.

Exactly 12 years after Hoi An was recognized as a national historical and cultural heritage, Kazik suddenly passed away.

In 2007, Hoi An city built a park in the centre of the ancient quarter where Kazik’s bust is placed to commemorate him.

It is the special space for a foreigner who devoted himself to Hoi An as if he still stayed there with Hoi An people.

Giving a speech at the event, Wojciech Gerwel expressed his honour and the feeling of being moved by Kazik's achievements, dedication, affection to Hoi An and Hoianian gratitude to Kazik.

According to Wojciech Gerwel, Vietnam and Poland have a good friendship.

The park with Kazik bust in the centre of the ancient town of Hoi An is a concrete example. Kazik can be seen as a special connection of the good traditional relationship between the two countries.

According to Chairman Nguyen Van Son, Hoi An will keep on the conservation and promotion of the heritage values of Hoi An ancient town, making it a favourite tourist attraction, helping local residents enrich basing on the heritage as the late architect Kazik’s desire. 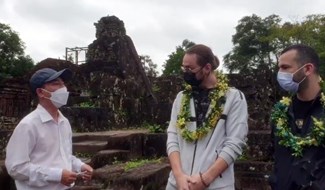