Under the agreement, JICA will support Hoi An to restore Chua Cau.

Speaking at the signing ceremony, Vice Chairman Tan said Chua Cau, a typical cultural heritage of Hoi An, is a symbol of the long-standing friendship between Vietnam and Japan.

The procedures should be finished soon so that Japanese experts can start the restoration by mid-2022.

According to Chief Representative of JICA in Vietnam Shimizu Akira, 2023 will be the 50th anniversary of the diplomatic relations between Vietnam and Japan.

Hopefully, the restoration of Chua Cau will be completed then, attracting more visitors, and cementing the friendship between the two countries.

Before Hoi An was recognized a UNESCO world cultural heritage in 1999, JICA had sent 5 experts to support Hoi An with the conservation and restoration of traditional architectural works.

Since 2003, there have been 11 JICA’s volunteers working at the Hoi An Center for Cultural Heritage Conservation and Management. 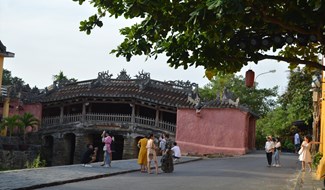 (QNO) - The project on preservation and restoration of Japanese Covered Bridge (Chua Cau) has been approved by the Quang Nam provincial People’s Committee.