(QNO) - The handover ceromony of the project on conservation and preservation of tower groups A and H of My Son Sanctuary (Quang Nam province) was jointly organised by the Quang Nam provincial People's Committee and Indian Embassy in Vietnam on December 20.

After 6 years (2017 - 2022) of being implemented with the support of the Indian Government, the project on conservation and preservation at My Son Sanctuary was basically completed.

During the restoration process, 734 artefacts of all kinds were discovered by Indian and Vietnamese experts, including unique artefacts of Champa sculpture, especially an intact  sandstone altar with a set of monolithic Lingam-Yoni.

It is the largest monolithic Lingam - Yoni set of Champa sculpture to be found so far. It is expected to be recognised as a Vietnamese national treasure.

According to Mr. Phan Ho - Director of the Management Board of My Son World Cultural Heritage Site, the   project is vivid evidence of the solidarity, friendship and effective cooperation between the Governments and peoples of Vietnam and India. It also aims to train skilled workers in conservation of relics.

Indian Deputy Ambassador to Vietnam Subhash P Gupta said that the project on My Son Sanctuary conservation and restoration is a symbol of the joint efforts between the two countries to protect the heritage site.

The Government of India committed to continuing to preserve, restore and embellish the tower group F1 at My Son Sanctuary and the Dong Duong Buddhist Monastery (Thang Binh district, Quang Nam province) and Nhan tower (Phu Yen) in the coming time. 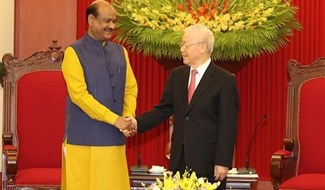 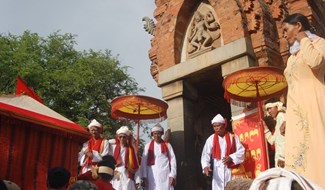 (QNO) - The remnants of the ancient Champa culture in Central Vietnam are the most vivid evidence of the Vietnam- India relations. The archaeological objects there date from the centuries before Christ to pre-modern era. 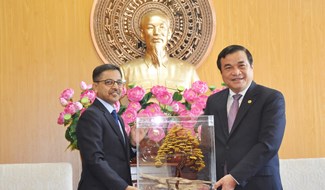 (QNO) - Secretary of the Quang Nam provincial Party Committee Phan Viet Cuong and Chairman of the Quang Nam People’s Committee Le Tri Thanh played host to the Indian delegation led by Ambassador Extraordinary and Plenipotentiary of the Republic of India to Vietnam Pranay Verma on March 28.