(QNO) - An exhibition of Co Tu brocade and weaving performance was held in Quang Nam Museum on the afternoon of December 23, 2022.

The event was under the project on heritage connection model associated with tourism for the development of the ethnic minorities possessing the heritage carried out by the Ministry of Culture, Sports and Tourism.

It was also part of the plan to implement the national target programme for socio-economic development in ethnic minorities and mountainous areas in the 2021-2030 period.

There were a lot of activities during the event, including showing films on heritages connecting 2 communities, displaying images of Co Tu brocade weaving, tools for weaving brocade, and performing brocade weaving. 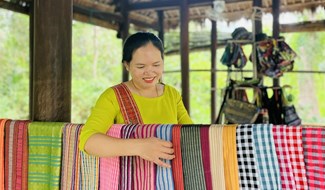 Cham brocade in My Son Sanctuary