The 200-page book is written in English and Vietnamese. It consists of 24 scientific researches related to heritage conservation in Vietnam, one of which is by Japanese Ambassador Extraordinary and Plenipotentiary in Vietnam Yamada Takio  and  Chief Representative of JICA Office in Vietnam Shimizu Akira.

Some in-depth researches on the Japanese Covered Bridge, its preservation and restoration are also included in the book. 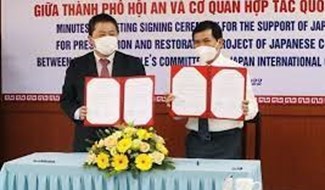