(QNO) - The Kingdom of Belgium has announced the natural disaster management capacity building project in Nam Tra My district of Quang Nam province.

The project is an expansion of the VLIR-UOS funded project on building the capacity of disaster management in the mountainous region of Da Bac district, Hoa Binh province.

It will be implemented by the Vietnam Institute of Geosciences and Mineral Resources and the Belgian partner Vrije Universiteit Brussel for a duration of 20 months (2021-2022).

As longstanding partners in development cooperation, Belgium and Vietnam have been maturing bilateral relations in different sectors.

The project shows the continued assistance Belgium gives to Vietnam in order to effectively respond to the challenges from climate change and natural disasters such as flooding and landslides in Central Vietnam, especially in Quang Nam province.

It is hoped to contribute to disaster management and to reduce the risks of disasters for the people in the future.

The project also contributes to raising local people’s and authorities’ awareness of disaster risks, enhancing the proactive capacity of responding to natural disasters in some areas of Nam Tra My district, Quang Nam province.

Besides, the project is a stepping stone to a longer cooperation between local governments and scientists in natural disaster control and management. 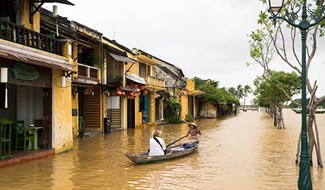 (QNO) - Quang Nam and Binh Dinh are two provinces in South Central Vietnam receiving the support of USD 58 million from Asian Development Bank (ADB) to improve the infrastructure, especially in mountainous areas, raise their abilities to adapt to climate change.