Singapore (VNA) - Since becoming a signatory to UNCLOS 1982, Vietnam has remained a responsible member and has made significant efforts to endorse and implement its provisions, according to an article posted on Fulcrum.sg, a website of Singapore.

According to the article, when the UN Convention on the Law of the Sea (UNCLOS) was open for signature on December 10, 1982, Vietnam was among the first 117 countries to sign the Convention.

Furthermore, Vietnam has called upon other states in Southeast Asia to respect and comply with UNCLOS. In particular, during its chairmanship of ASEAN in 2020, Vietnam repeatedly stressed the relevance of UNCLOS in maintaining regional peace and resolving maritime disputes.

Most recently, together with Germany, Vietnam initiated the establishment of the UNCLOS Group of Friends to accelerate cooperation between like-minded countries on common maritime goals.

Mentioning the role of UNCLOS 1982, the article said known as the “Constitution of/for the oceans”, the Convention sets out a legal framework for regulating most sea-related activities and provides a platform for international cooperation on maritime-related issues. Furthermore, it stipulates binding mechanisms for settling disputes at sea.

UNCLOS standardises claims over maritime entitlements and sovereign rights of its signatories including Vietnam. Before UNCLOS, especially in the first half of the twentieth century, there were chaotic situations where countries argued over their maritime boundaries, leading to disputes. The adoption of UNCLOS has helped to reduce these kinds of disputes, as the Convention became a legal basis for the demarcation of overlapping territories.

The Convention has provided a framework for member states, including Vietnam, to cooperate with other states on various issues like crimes at sea, namely piracy and armed robbery against ships, protecting the environment, conducting scientific research, and managing resources.

The importance of UNCLOS to Vietnam has been proven over the past 40 years, especially in terms of legitimising the country’s maritime claims, enhancing its domestic law and management system, accelerating cooperation with other states, and settling maritime disputes./. 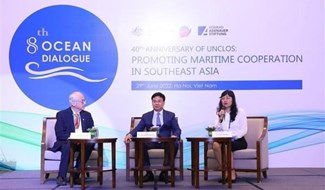 Hanoi (VNA) – The 8th Ocean Dialogue took place in Hanoi on June 29 under the theme “40th Anniversary of UNCLOS: Promoting maritime cooperation in Southeast Asia”, drawing more than 150 direct and 100 online participants, including 15 speakers from 14 countries and territories, and representatives from the UN. 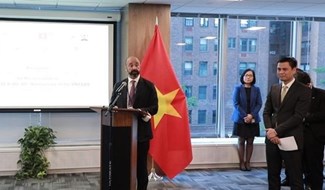 New York (VNA) – Nearly 100 member states of the Group of Friends on the 1982 UN Convention on the Law of the Sea (UNCLOS) held a ceremony on June 14 to mark 40 years since the adoption of the convention. Hanoi (VNA) – All countries should adhere to international law, the 1982 United Nations Convention on the Law of the Sea (1982 UNCLOS) and regulations of the International Civil Aviation Organisation (ICAO), Spokeswoman of the Vietnamese Ministry of Foreign Affairs Le Thi Thu Hang has said.