Vietnam stands ready to play a connecting role between the Association of Southeast Asian Nations (ASEAN) and China to promote practical mechanisms to handle sea-related issues, he said.

Vietnam’s efforts in the international arena and its call for stronger international cooperation have helped the country effectively implement its foreign policy, Tymchenko noted.

Meanwhile, Vladimir Volya, an expert from the Ukrainian Institute of Politics, said Vietnam’s stance reflects its responsibility in maintaining regional peace and stability.

Daniil Bogatyryov, another expert also from the Ukrainian Institute of Politics, said such proposals completely match the present structure of international relations and should be further discussed.

Ruslan Bortnik, a colleague of Bogatyryov, shared the view on Vietnam’s constructive and practical proposals given the complex developments in the East Sea.

Expert Sergey Shabovta, also from the institute, said the proposals have contributed to promoting peace, stability, cooperation and development of not only coastal countries but also other nations worldwide.

First, it is imperative that states and international organisations develop a comprehensive, extensive and broad awareness of the importance of oceans and seas, and the threats to maritime security.

“Vietnam proposes the development of a network of arrangements and initiatives for regional maritime security with the United Nations working as the coordinator, to bolster information and experience sharing, coordinate actions, and address common challenges in a timely manner,” the leader said.

Third, the policies, regulations and conducts of states at sea must be in line with international law, especially the United Nations Charter and the 1982 UNCLOS./. 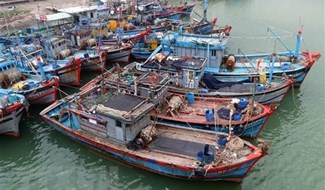 Hanoi (VNA) - China’s military exercise in the Hoang Sa (Paracel) archipelago area violated Vietnam’s sovereignty over the islands and went counter to the spirit of the Declaration on the Conduct of Parties in the East Sea (DOC), Spokeswoman of the Vietnamese Ministry of Foreign Affairs Le Thi Thu Hang has said.