Kiev (VNA) - Sergey Tolstov, an expert at the Institute of World History, the National Academy of Sciences of Ukraine, has published an article highlighting the role of international law and the significance of the Permanent Court of Arbitration (PCA)’s ruling in settling disputes in the East Sea.

The article was launched on Porady news site on the occasion of the five years since the PCA, based in The Hague (the Netherlands), issued a verdict relevant to the waters on July 12, 2016.

The scholar said that the PCA has delivered a clear ruling on China’s unreasonable claim on a large area in the East Sea, internationally called the South China Sea.

The PCA ruled that China holds no legal evidence to affirm its “historic rights” towards resources on the waters in its self-claimed “nine-dash line”.

It means that China cannot issue its exclusive economic zone (EEZ) claim and do not have “historic rights” to declare its sovereignty on the exploitation of natural resources in the region.

Regarding the role of international law on settling disputes in the East Sea, Tolstov underlined the responsibility of all sides in the framework of the 1982 United Nations Convention on the Law of the Sea (UNCLOS).

He voiced his concern about arbitrary actions which fail to abide by international law and cause security unrest in the region.

The claimants need to voluntarily comply with the UNCLOS and PCA’s ruling, the Ukrainian expert added.

He affirmed that in the current context, they can work towards the signing of the Code of Conduct in the East Sea (COC), upholding freedom of navigation./. 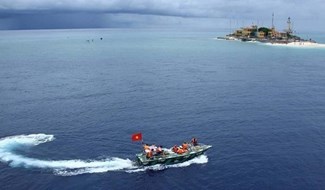