Hanoi (VNA) – The Vietnamese and Lao Parties, States and people are resolved to preserve and promote special relations between the two countries intensively and extensively in any circumstances, the top leaders affirmed on June 28.

The Vietnamese leader said Thongloun Sisoulith’s visit will contribute to strengthening cooperation between the two Parties and countries, serving the cause of reform and national construction and defence in each country.

Thongloun Sisoulith expressed his delight at great, comprehensive achievements Vietnam has recorded after 35 years of "Doi moi" (renewal), and congratulated the country on the success of the 13th National Party Congress as well as the election of deputies to the 15th National Assembly.

The Lao leader said he believed that under the leadership of the CPV, headed by General Secretary Trong, the Vietnamese people will reap new, greater achievements.

For his part, Trong congratulated Laos on the success of the 11th National Party Congress and outcomes of the election of deputies to the 9th National Assembly, and congratulated Thongloun Sisoulith on his election as the General Secretary and President of Laos.

The Vietnamese Party, State and people strongly and comprehensively support the cause of reform and national construction in Laos, and shared difficulties facing the country amid the COVID-19 pandemic, he said.

The leaders highly evaluated the valuable, wholehearted and effective support the two Parties, States and people have provided for each other in their past struggles for national liberation and unification, as well as the present cause of national defence, and the fight against COVID-19.

They stressed the strategic significance of the great friendship, special solidarity and comprehensive cooperation between the two countries, which, they said, are an invaluable asset shared by the two nations, and a factor guaranteeing their existence and development.

The two leaders agreed to work together to enhance the Vietnam-Laos comprehensive cooperation on the basis of promoting the spirit of independence, self-reliance, equal and win-win cooperation and giving priority and incentives to each other, and supporting and creating favourable conditions for mutual developmet, for the prosperity of each country, and for peace, stability, cooperation and development in Southeast Asia and in the world at large.

They reached consensus on increasing information exchange, consultation and coordination, and continuing to support each other in international and regional issues and activities at multilateral forums; promoting the central role of ASEAN and ASEAN-led mechanisms as well as the important roles of the United Nations, the Mekong Sub-regional cooperation mechanisms, the World Trade Organisation (WTO) and the Asian-Europe Meeting (ASEM) so as to contribute to maintaining peace and cooperation and development; and strengthen coordination with Cambodia to implement the agreement between the three Prime Ministers on the Cambodia-Laos-Vietnam Development Triangle Area, and actively carry out the Action Plan to connect the three economies by 2030.

The two leaders also pledged to strengthen cooperation and coordination with each other and with relevant countries and international organisations to manage, develop, and use the Mekong River’s water sources sustainably and effectively.

They emphasised the importance of maintaining peace, security and stability as well as ensuring security, safety and freedom of navigation and aviation in the East Sea, settling disputes in the sea by peaceful measures on the basis of international law, including the 1982 United Nations Convention on the Law of the Sea, and promoting the full and effective implementation of the Declaration on the Conduct of Parties in the East Sea (DOC) and working towards the formation of an effective and pratical Code of Conduct in the East Sea (COC), in accordance with international law.

The Lao leader invited the Vietnamese Party chief and his spouse to pay an official friendship visit to Laos. The latter accepted the invitation with pleasure and invited senior Party and State leaders of Laos to visit Vietnam. 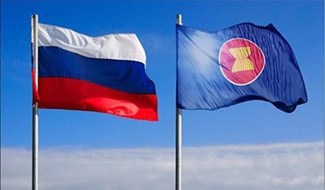