Pretoria (VNA) – South Africa’s The Diplomatic Society on August 16 posted an article by the site’s founder and Editor-in-Chief Kirtan Bhana, appreciating the stances of Vietnam and India on maritime security.

In the article, Kirtan Bhana stressed that at the first-ever UN Security Council Open Debate on Enhancing Maritime Security, which was held virtually on August 9, Vietnamese Prime Minister Pham Minh Chinh acknowledged the 1982 UN Convention on the Law of the Sea (UNCLOS) as the Constitution of Oceans and Seas, the universal and unified legal framework within which all activities in the oceans and seas must be carried out, and the basis for international cooperation to address common challenges in the world.

The journalist also quoted Chinh’s three proposals at the open debate. Firstly, it is imperative that states and international organisations develop a comprehensive, extensive and broad awareness of the importance of oceans and seas, and the threats to maritime security. Secondly, maritime security is a global issue and therefore requires global solutions to be provided by a network of arrangements and initiatives for regional maritime security with the United Nations working as the coordinator, to bolster information and experience sharing, coordinate actions, and address common challenges in a timely manner, And thirdly, the policies, regulations and conducts of states at sea must be in line with international law, especially the UN Charter and the 1982 UNCLOS.

Vietnam’s PM also re-affirmed the country consistently pursues a foreign policy of peace, independence, self-reliance, multilateralization and diversification of international relations, as a trusted friend and partner, and a reliable member of the international community. Vietnam stands ready to cooperate, exchange information and share experience with other countries in efforts to address maritime security issues and to contribute positively to the maintenance of a peaceful and secured maritime environment, and sustainable development in the region and the world, the author wrote.

He also cited the speech by Indian Prime Minister Narendra Modi as the rotating Chair of the UNSC in August and the chair of the open debate “Enhancing Maritime Security – A Case for International Cooperation”./. 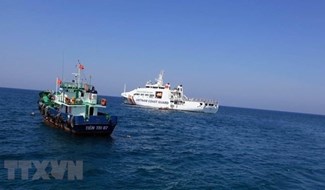 (QNO) - The Philippines has emphasised the importance of maintaining navigation and overflight freedom in the East Sea, as well as the peaceful solution to disputes through international law.