On October 22, 2018, the Party Central Committee in the 12th tenure issued Resolution No 36-NQ/TW on the strategy for the sustainable development of Vietnam’s marine economy to 2030 and vision to 2045, in which the overall goal by 2030 is to turn the country into a strong maritime nation.

The adoption of the Resolution demonstrates the Party’s strategic vision and consistent views on seas and islands in the cause of national construction and defence. The entire political system and the country’s people have been making major efforts to synchronously and drastically implement the measures and solutions in the Resolution to reach the targeted goals.

Over past years, the army and the people have recorded important achievements in carrying out the dual tasks of developing the marine economy and protecting the country’s sovereignty over its seas and islands.

In particular, all levels and branches from the central to local levels and the people have a deeper understanding about the key content of the Party’s viewpoint on protecting sovereignty and territorial integrity and maintaining a peaceful and stable environment to build and develop the country, as well as the legal basis and historical evidence of Vietnam’s sovereignty and maritime interests in the East Sea.

The political system, laws, and State management apparatus on seas and islands have also been improved and brought into play. After the Resolution on Vietnam’s maritime strategy to 2020 was adopted in 2007, the National Assembly and the Government issued a host of legal documents governing various fields relating to the country’s seas and islands, thereby creating a legal basis for the implementation of management, protection, and economic development of the seas.

On that basis, central and local ministries, departments, and branches have concentrated all resources on investing in building infrastructure and creating a stable and solid position for production, fishing activities, and resources exploitation. Many new policies have created favourable conditions for people to settle down on the islands.

Vietnam’s marine and coastal economy has posted many achievements to date, becoming a driving force in national development. The role and proportion of the marine economy in the national economy has increased markedly, with islands such as Van Don, Cat Hai, Con Dao, and Phu Quoc developing into economic centres.

In addition, propaganda on seas and islands and national defence and security education works have been bolstered, especially among fishermen and forces directly operating at sea and in coastal areas, helping to strengthen solidarity and the attachment between people on the islands and the armed forces, contributing to building stronger national defence and security on seas and islands./. 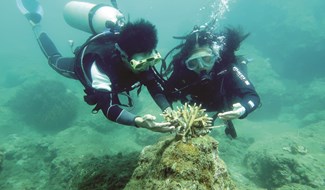 (QNO) - A team of divers from the UNESCO’s Cham Islands World Biosphere Reserve (Hoi An city, Quang Nam province) collects trash and wipes out thorny starfish every day to clean the seabed and protect marine corals there.