Kieu Bao Han was born and grew up in a family with tradition of making vermicelli and noodles. Her desire of developing local and familial traditional products has been harboured since she was at university.

After over 2 years of development, Hapinut has step by step confirmed its trademark in the market.

Besides, a lot of other Hapinut products are popular with customers, including peanut oil, butter, vermicelli, and fresh Quang noodles.

According to Han, Hapinut is currently focusing on the project “Sợi Ngọc xứ Quảng” (Quang Nam pearl yarn) with a factory producing vermicelli and noodles that is equipped with automatic technology.

The project is aimed at making Quang noodles a special portable gift. Han hopes Quang noodles will be delivered to every place in the country and abroad via the project. 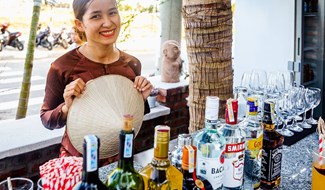