In 2012, ILV and the Tam Ky city’s People’s Committee (Quang Nam province) signed a 4.5-million-USD agreement on a complex of welfare and education in An Phu ward in Tam Ky city. The project was implemented the period of 2013 - 2020.

However, the project has been extended to 2030 with a total investment of 2.5 billion won.

It consist of a Korean-style kindergarten, a facility for disabled people, an international education center, a vocational school, a rehabilitation center, a training center, an administrative area, facilities for the elderly and other social welfare facilities.

He said his organisation will invest more in building and putting into operation some facilities for the elderly (a nursing home with a capacity of 40-50 people) and the disabled in Tam Ky city.

At the meeting, Vice Chairman Tran Anh Tuan highly appreciated ILV's projects, which have contributed to improving the quality of life of local disadvantaged children and the poor, strengthening cultural exchanges between Quang Nam and localities of South Korea.

He stated that Quang Nam will create favorable conditions for ILV to deploy projects in the province. 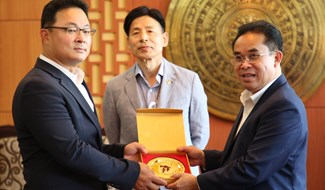