(QNO) - The 550-year journey of Quang Nam’s name was once again recognised and honoured through the national conference of the similar title held on December 28, 2021.

The national conference on 550 years of Quang Nam foundation and growth was jointly held by the Quang Nam provincial People’s Committee and Vietnam Academy of Social Sciences.

It was a chance to identify, evaluate, and confirm the role of Quang Nam in the national construction and protection as well as in the future development.

The administrative unit named Quang Nam was founded on June 1471 by King Le Thanh Tong. Quang Nam means the open land which was later considered as the pharynx of Thuan Quang region, based on which Lord Nguyen Hoang expanded his fortune in Dang Trong.

Since then, Quang Nam has kept on its journey to enrich its cultural values.

Also on the journey, hundreds of craft villages were founded and developed, making Quang Nam a hundreds-of-craft county.

Moreover, it was in Quang Nam that a well-known international trading port was built. It was the place for international business to be done through the salt, silk, and ceramics routes.

Besides, Quang Nam people have contributed to the local growth by popularising dialects, preserving local cultural values, and being open to new ideas.

The national conference on 550 years of Quang Nam foundation and growth was aimed at identifying Quang Nam precious values preserved and promoted throughout the historical journey.

At the same time, the conference gave some suggestions for the preservation of heritages that can be used for local tourism and socioeconomic development.

Quang Nam is one of the places with the richest cultural heritage. It is necessary to have measures for sustainable preservation and promotion of its precious values for future.

It has important factors to drive economic development in the plains, coastal areas, the midland and mountainous areas.

The local life is more and more improved. Quang Nam is making every effort to become a good province of the country by 2030. 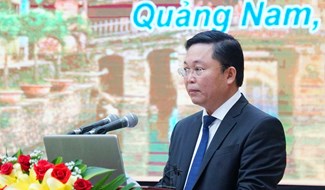