Bhriu Po is the first Co Tu to take a bachelor's degree. Leaving university, he helped ethnic people in his native village with wet rice cultivation.

Bhriu Po is also the pioneer in the cultivation of medicinal herbs to get rich. He is now well-known as a king of Morinda officinalis.

Morinda officinalis is a precious medicinal plant that is used in the treatment of depression, osteoporosis, fatigue, rheumatoid arthritis, and infertility due to their anti-depressant, anti-osteoporosis, pro-fertility, anti-radiation, anti-alzheimer disease, anti-rheumatoid, anti-fatigue, anti-aging, cardiovascular protective, anti-oxidation, immune-regulatory, and anti-inflammatory activities. It was found to be popular in Tay Giang forests in 2006.

Having an awareness of its economic values, Bhriu Po started to grow Morinda officinalis and he owned a garden of 6000 M. officinalis trees by 2009.

He provides about 120,000 young plants of this species for medicinal herb gardens in Quang Nam and Central Highland provinces every year.

Morinda officinalis young plants provided by Hien are more and more popular with people thanks to their shortened harvest time. 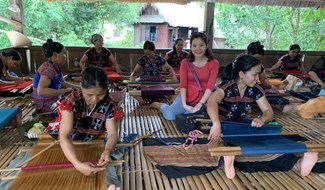 The Quang Nam Tourism Association has just done a survey into Tay Giang to find out tourist attractions for sustainable development.